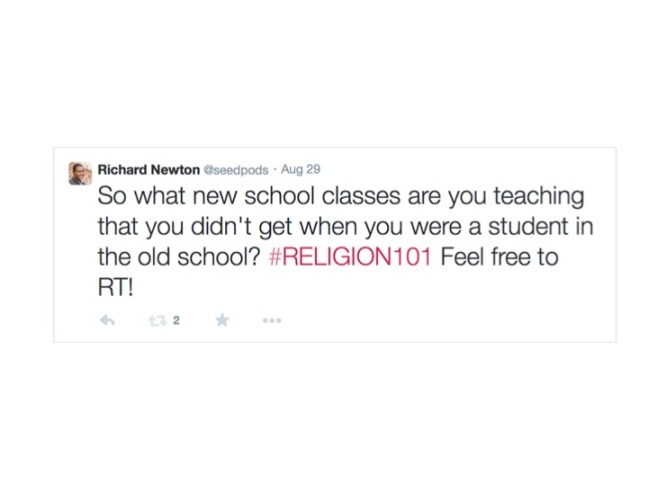 On August 29, 2014, members of the Society of Biblical Literature and the American Academy of Religion shared tweets on what they had been taught as students and what they are teaching now as professors. Thanks to everybody who was a part of it. And a special thanks to the Forum for Theological Exploration, Seminarium, and the Wabash Center for Teaching and Learning in Theology and Religion for reaching out. I’ve gathered the results below and at Storify.

I had an epiphany this morning. Most of the classes I am teaching are not retreads of classes that I took as an undergrad.

It’s not just “World Religion here, Intro to X,” but classes that address questions raised from those formative classes.

I remember a fellow student asking why we skip Numbers in Intro to OT/HB when it’s a really important book in light of the AfAM history.

Now I teach a class on the Bible and Race in the USA.

This is not to knock the standard curriculum. But it leads me to wonder how courses of study develop in Religious Studies.

So what new school classes are you teaching that you didn’t get when you were a student in the old school? #RELIGION101 Feel free to RT!

@seedpods @Seminariumblog that’s a really interesting question … would like to know what the responses are.

@seedpods @NyashaJunior “The OT in the NT” (literary allusion etc).

@seedpods @NyashaJunior OT in NT takes up “Why are their whackadoodle interpretations okay while I must do strait-up exegesis for an ”A“?

#RELIGION101 Food and Religion;Gender and Religion. Not learning to reproduce the same boundaries but how they are constructed and contested