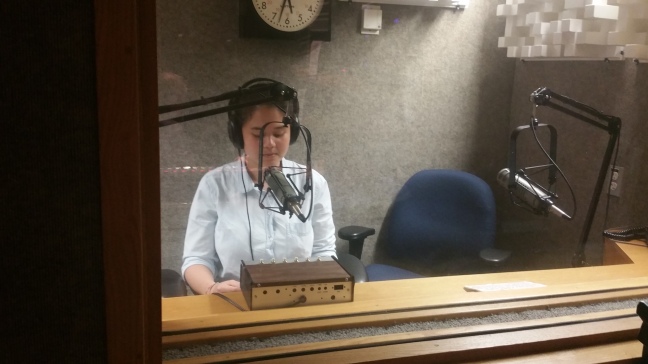 One year in and Sowing the Seed is proving itself as a generative space for students to become producers—and not just consumers—of knowledge. Throughout the semester, we’re taking a look back to see what some of our students have been up to since participating in our student-scholar collaborative magazine. Maya Aphornsuvan reflects on a summer internship that left her positively wanting to explore the possibilities for discussing religion and culture in the media.

This summer I had the opportunity to intern at Voice of America’s Thai Language Service. As someone with an interest in news, I thought it would be a great way to get some experience and see where it takes me.

I went in with absolutely no idea what I would be expected to do. From the very beginning, I was tasked with translating news from English to Thai, then recording it to be aired on the daily radio show that was broadcast into Thailand. Toward the end, I got to sit in the studio and read the news live, which was nerve wrecking. When we were on air, we had a language producer who would instruct the sound engineer what to do next (what segment we were in, what jingle to play, etc.). I assisted the language producer and watched them handle some type of crisis almost everyday.

I also had the chance to conduct my own interviews and write originals stories that were aired on radio and published on the website. I assisted our videographer with interviews outside of the office, and I got the chance to come up to Philadelphia during the Democratic National Convention. Although I was not inside the event itself, I got to interview people, write stories, record and edit them within a few hours to be broadcast from Washington D.C. to Thailand. While I learned the ins and outs of a radio show, what I took out of the experience was much larger than simply new technical skills.

Over the summer, I learned how to be more precise and intentional about myself, my skills, and what I want. We had a daily radio show, which meant that deadlines were everything. I learned how to work on getting straight to the point with my ideas and passions, even though it might seem too direct at times. There is no shame in having a passion, and there is no shame in asking for feedback or opportunities for projects.

I had no knowledge of how the world of radio works, so one of the first things that caught my eye was the intention behind every action. A five-second music clip wasn’t placed there for fun; it was a segment into another part of the show. Every single action made had a purpose behind it. It was seen in the literal and technical sense, but I also saw it in the broadcasters’ work ethics. They try their best to present every story with intention, and that has made me rethink how I see the world around me. Little actions that add up are what makes the world go round, and paying attention to detail goes a long way.

The first thing my supervisor and coworkers asked me was what I hoped to learn. I was vague about my intentions because I wasn’t quite sure, so they took that as a chance to put me into every part that makes up the department, and I was challenged with something new everyday. Their work ethic was amazing to see, as my coworkers came from different backgrounds but were always trying to learn new computer programs, understand new trends, learn more about current affairs, and everything in between.

Yet these lessons came along with frustrations I never knew would be present. I never realized how much my physical environment impacted my curiosity. Being a student allows me to constantly be surrounded by people with similar passions, have very specific conversations that aren’t heard elsewhere, and see problems and solutions in smaller settings. The Religious Studies Department at Elizabethtown College has constantly challenged me to see religion’s impact on daily life. However, once I started working at my internship, I found it incredibly hard to incorporate my interests in religion and politics in the way I would at school. The “real world” was so fast-paced with so many different issues to be covered. I found myself excited to come back to school and to be thrown into conversations and ideas that are easier to make sense of in an academic setting.

But this summer has given me the desire to seek out and create platforms to continue these conversations about religion. Sowing the Seed is the first platform where I have been able to do that. The confidence I gained as production assistant has been a great boost for my confidence. It was there that I realized that, “yes, I am capable of learning.” (I had been convinced that I was terrible at learning new things).

I became involved with Sowing The Seed after expressing my interest in it to Dr. Newton, and started off editing the podcast, Broadcast Seeding, a skill that I transferred over to editing recorded audio during my work at VOA. Before Sowing the Seed, I didn’t have the courage to express my interests aloud, so working there was a big step that pushed me to step out of my comfort zone and seek out more challenges. It gave me a chance to explore a small interest of mine, which I then made bigger by taking on my internship. Every growth opportunity begins with taking a small step, and Sowing the Seed has been that small step for me.

Maya Aphornsuvan ‘18 is a junior at Elizabethtown College. She is a Political Science–Religious Studies double major with interests in media studies, social justice, and comparative religions. She serves as the production assistant of the podcast, Broadcast Seeding.