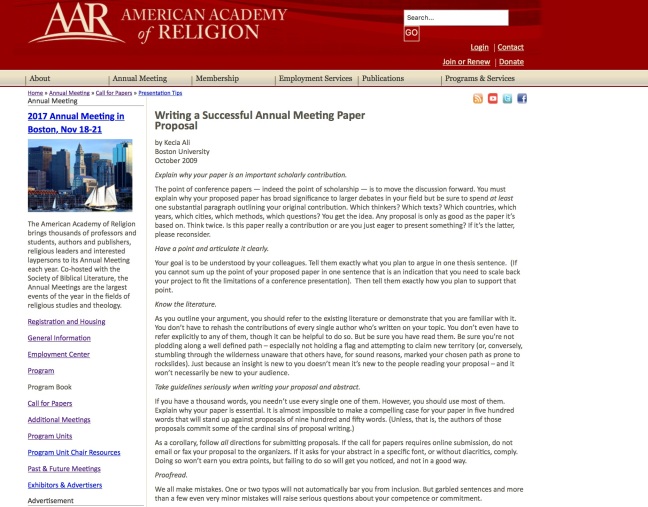 This is a recap of a discussion on how to improve the annual meetings of the Society of Biblical Literature and the American Academy of Religion. It’s part of our professional development series, Real Talk.

I’ve been meaning to write a blog post about my time at the 2016 Annual Meetings of the American Academy of Religion and the Society of Biblical Literature. Frankly, that much networking plus raising an infant and toddler has left me so drained that I haven’t been able to muster the strength to revisit the headspace of being “on.”

I'm still recovering from an exciting #sblaar16 w/ lots of great conversation about #digitalreligion and #pedagogy. A storify may be to come

In the five or so months that I’ve avoided writing this post, I saw another conference proposal season pass. And as I said on Twitter, it stunk to see the hopes of colleagues dashed by those dreaded rejection notices.

Lots of friends getting word back about #sblaar proposals. Rejection is crushing when $ and professionalization are on the line. (thread)

I’ve been quite fortunate on the conference scene. Between good mentorship on how to navigate the proposal process and generous sponsorship in my subfields by senior scholars, I have been able to find my way. I know not everyone has been so lucky.

But I am at the point where I am more comfortable trying to find constructive ways to improve the process so that professional success relies a little less on the happenstance of one’s academic presence.

I started tweeting some of the better practices I had seen at the meetings. For instance, some program chairs offer to give feedback on rejected proposals, especially to graduate students.

Others began sharing their observations as well.

@seedpods but we're a small section and have that luxury. I hear you – so much of academia is just brutal.

@mpgPhD @seedpods Yes, same. Also reply to anyone who has asked for feedback.

@seedpods The presentations at the conference often made me wonder what didn't make the cut, even when I did make i… twitter.com/i/web/status/8…

The theme of the conversation was a call to recognize what is, what is not, and what could be part of the lead up to the annual meetings.

Having been on cmtes. for SBL and AAR, I think the process could be more generative.

I really appreciate chairs that, if asked, will let you know how you might improve a proposal or why it didn't quite fit the year's bill.

That seems especially important for students and early career scholars trying to break in. It's also made tricky by different cmte opinions.

So consolation, I've seen the same proposal rated as both among the highest and lowest depending on reviewers.

We tried to make visible some of the work facing program units.

Decoding a program unit's culture is huge. Hopefully they're forthright in the call. But many CFP's aren't indicative of much.

@seedpods Yes, you put my vague feeling into words. There seems to be a stronger insider/outsider coding here than with other conferences.

The previous year's board mtg is worth a visit for fact finding on this score, but that presumes you were there and are welcome.

So you can see where the insular nature develops for so many groups.

@h00dyR @seedpods @mjasdixon But that would take more service/volunteering and already tough for steering committee… twitter.com/i/web/status/8…

@seedpods Having served on a couple of program units, volunteers are usually busy & CFP is usually thrown together hastily.

@dwidmanna this could be part of the Prof. development of grad programs and program units that are looking to be about something.

Anyway, all this leads me to conclude that the AAR and SBL could do better.

It seems to me that it's in the best interest of a program unit to be welcoming of new people while building a culture conducive to it.

@seedpods needs to be a way to have it be an energizing/reinvigorating experience of scholarly community. Not there yet.

Other corners of Academe seems to be in a similar frame of mind and are quite responsive.

@seedpods This essay on poverty made me think about class, academia, and conferences kenyonreview.org/2016/02/on-pov… ht @s_m_i

@seedpods Pockets of @ncte are talking about this. A former Pres of the org added this to his blog to demystify the… twitter.com/i/web/status/8…

@mattskillen Thank you for your shout-out last night, Matt.

So I threw it out there. How could we change the conference paper proposal process for the better?

And I tried to offer some ideas.

Think about reserving space for grad students and early career--we do it for senior scholars w/on batting an eye.

I know in 2010, the SBL’s African American Biblical Hermeneutics program unit reached out to graduate students working in programs to encourage proposals. This actually led to my first SBL presentation.

Websites for program units to be a bit more deliberative about CFPs--what go it and where a program unit is headed.

The SBL’s Social Scientific Criticism of the New Testament program unit (aka “The Context Group”) has had a site forever. 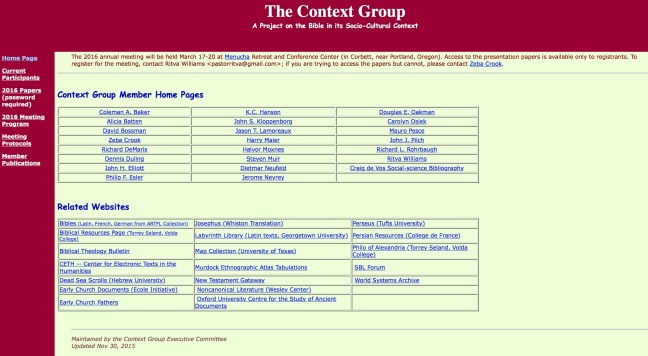 And as I’ve discussed on here before, scholars might look at other conference venues.

I just think it’d be a shame if AAR and SBL counted on people simply not attending anymore. I’d much rather pay dues to organizations that are looking for more ways to include and develop the work of its members. Why not employ a sensible solution like the one below?

@seedpods One person = one appearance on the annual program. Period. Not once per role. There's a way to change things. @AARWeb @SBLsite

In any case, I’m hopeful because we are beginning to build the guild we want by disseminating our ideas and tools of the trade.

Dr. Michael J. Altman at University of Alabama used his department’s podcast to do just this. The whole episode is on conferences in religious studies and is worth a listen. He gave some great tips in a closing segment (starting at 42:34). Give them a like over on iTunes and subscribe to them there or on SoundCloud.

In a meeting, someone mentioned their surprise that I’d layout my concerns about the AAR and SBL like this. But the way I see it, this is part of what it means to be a professional in any organization.

So About Last Year…

My conviction on this matter was affirmed by my encouraging experience last year. I participated in three sessions showcasing different aspect of the work and conversation happening here at Sowing the Seed.

As I’ve written before, so much of academic life is trying to figure out how people fit into the boxes we use to make sense of our worlds. Knowing some of the politics and frustrations that entails, I’ve tried to use this website to open that process up a bit. And I appreciated sharing about that in some different venues.

The Society of Biblical Literature’s Student Advisory Board put together one of those workshops I wished they had when I was a graduate student. I offered my thoughts and advice on how graduate students can develop teaching philosophies for the market and for the classroom. It was an intimate program with table sessions, panel Q&A, and a guided self-assessment. It was neat to connect with other scholars who are passionate about teaching. 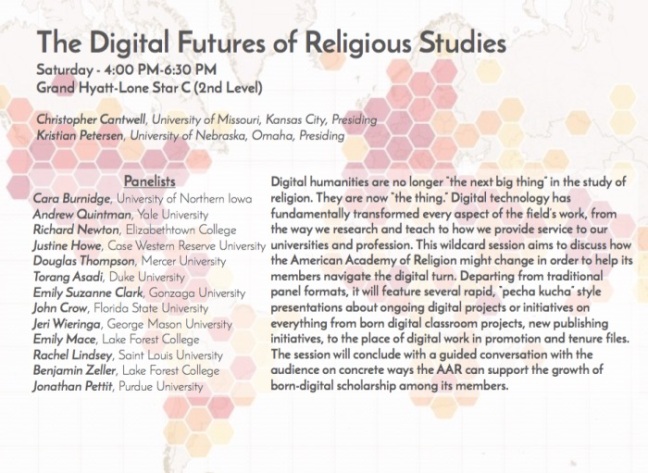 Christopher Cantrell and Kristian Petersen put together an amazing wildcard session on digital projects being conducted in religious studies. It was a high-paced, “pecha kucha” style session features some of the most innovative digital projects in the guild.  The session even sported its own hashtag: #DigitalReligion.

I was honored, humbled, and honestly a bit nervous to join such esteemed colleagues in this event that you won’t want to miss. I spoke about Sowing the Seed as an emerging model of scholarly communication. I focused particularly on how our student-scholar collaborative model works has had a growing influence on those in our network. 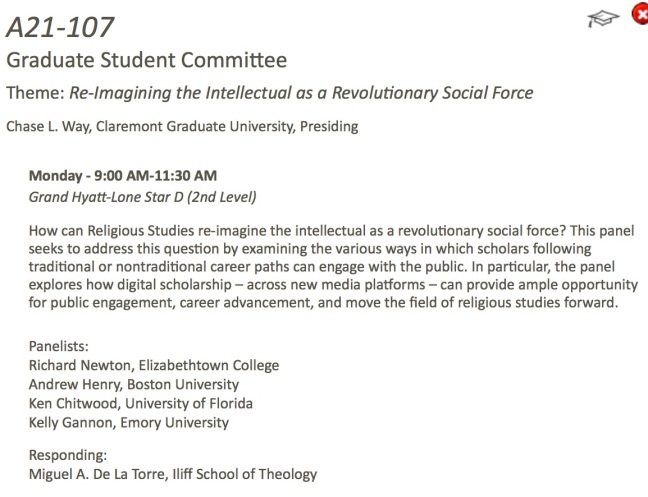 I wrapped up my conference with another student-oriented panel–this time for those in AAR–who are interested in the notion of digital scholarly engagement beyond the academy. The panel also features presentations by the folks behind some of my favorite go-to online sources.

I spoke more autobiographically about the Sowing the Seed’s development into a platform for connecting students with professional scholars and non-academic publics. I led an exercise to help graduate students conceptualize their own work in relation to potential conversation partners. And I mused about how this work helped me while on the job market.

You can download the handout for my portion here.

The reason why I continue to come back to the annual meetings is because networking is more than the exchange of business cards. I believe in cultivating professional spaces for discussion, encouragement, and good times. Below is a bit of what I mean:

Getting serious about Texas history at the Alamo w @seedpods. pic.twitter.com/FupBoAlDos

We can use #digitalreligion to change the face, labor practices of the academy. @seedpods is a badass, friends. #sblaar16

.@seedpods “we all have publics” no matter how small, even if not internet famous. #sblaar16

.@seedpods “reimagine improbabilities as possibilities” by creating a more compelling version of the academy. #sblaar16

.@seedpods says we need to focus on “being a craftsperson and not a product.” By exploring ideas not just pushing your knowledge #sblaar16

.@seedpods “my conference life has changed because of twitter” and “we became the community we want the academy to be” #sblaar16 #testify

.@seedpods writing often for “classroom I one day hope to have” use space as lab for strategy #sblaar16

So that’s what went down officially in San Antonio. Hands down, the highlight was getting to hang out with people I first connected with via Twitter, Facebook, and the podcast. That’s the spirit I hope can be indicative the annual meetings.  That’s part of the reason why I’m committing to finding ways to help our readers nurture fruitful conversations on religion, culture, and teaching where they are at. We have some new types of projects that will roll out year, so stay tuned. And if you have ideas about how to enhance the work of the guild, let’s chat.