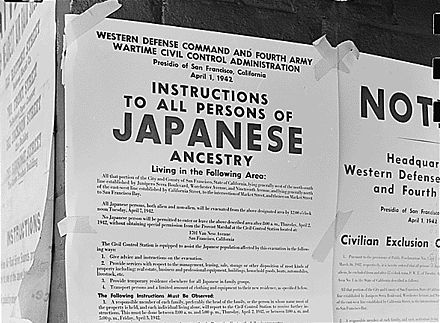 After the recent LA Times mea culpa regarding two published letters rationalizing Japanese-American internment, we take a concerted effort at examining an aspect of WWII history that is often overlooked: religion. Marlee Schwalm (Elizabethtown College ’18) surfaced a struggle between Shinto and Christianity in the Pacific conflict. Written before the LA Times imbroglio, her piece is a solid reminder that humans charge their histories with all sorts of forces. This is the fourth issue in our fourth volume on the Bible and Race in the USA. Read a response to this piece here. And see our first, second, and third volumes here.

It is written in all the history textbooks: “December 7, 1941—a date which will live in infamy—the United States of America was suddenly and deliberately attacked by naval and air forces of the Empire of Japan.”.The nation was riddled with Japanophobia and President Franklin D. Roosevelt knew he had to do something to calm their fears. The day after the attack America declared war on Japan. What was not emphasized in American history textbooks is the Executive Order 9066 of February 1942. FDR decreed the United States was going to do anything to win this world war and in doing so, over 120,000 Japanese Americans had to be relocated from their homes and placed in incarceration camps throughout the USA because of this document.

This movement of bodies is explained by Michel DeCerteau’s scriptural economies theory. The scriptural economies theory explains how marginalized people groups become more like the central group of that time.[1] The Executive Order along with the declaration of war quickly became a religious counterattack on the Japanese religion of Shintoism. Shintoism was the Japanese national religion beginning at the end of the 19th Century. Shintoism is a form of devotion to invisible beings and powers called kamis. These kamis inspired the Japanese kamikaze attack on Pearl Harbor.This immediately became more than an entrance into WW2; it became a religious war on the Japanese. After using the bombing of Pearl Harbor as an excuse to incarcerate a whole ethnicity of Americans, the United States was ultimately able to use government-regulated Protestantism and Catholicism to marginalize Japanese-American Shinto heritage. In response, Japanese Americans learned to interpret the Bible as victimized people that have an incredible amount of hope and endurance within them while having their religious freedoms stripped from them.

“…to prescribe military areas in such places and of such extent as he or the appropriate Military Commanders may determine, from which any or all persons may be excluded, and with such respect to which, the right of any person to enter, remain in, or leave shall be subject to whatever restrictions the Sectary of War or the appropriate Military Commander may impose in his discretion…”

(Image taken from: http://i.imgur.com/ev7QfxI.jpg (Links to an external site.))

Many Americans believed the Pearl Harbor attack was only a military strike done by the Japanese. Underlying the Japanese military victory of bombing Pearl Harbor there was a raging religious war that had begun. The word “kamikaze” is from Japanese legend and translates as “divine wind.” The kamikaze was created by either the Shinto deity Raijin (god of lightning) or Fujin (god of wind). Kamikaze is a metaphor for Japanese soldiers being the divine wind to conquer their enemies at sea at whatever cost necessary. To this day, Pearl Harbor is remembered as a Japanese kamikaze attack.

Shintoism was so integrated into every day Japanese that it just made sense for their religion to influence their military rampage. The Japanese phrase, Hakko Ichiu, which means “world under one roof,” meant world domination under Shintoism. Shinto was  integrated into nearly every aspect of Japanese life, giving a context for the “kami” inspired attack on America and the American government’s drastic response.

After the Executive Order was decreed, Japanese Americans were forced from their homes throughout the country and relocated in one of ten concentration camps. Here they would work, eat, sleep and worship within government set limits. The oppression and relocation Japanese Americans faced during this time is a prime example of DeCerteau’s scriptural economies theory. There were three religions the US government allowed and monitored in the concentration camps: Buddhism, Protestantism, and Catholicism. The government purposefully did not allow Shintoism with the idea being Japanese Americans would become more American than reverting back to their Japanese heritage.

Religion helped some prisoners endure these camps. Japanese Americans’ acceptance of Christianity and Protestantism was heavily influenced and molded by their circumstances. C.H. Kim says Asian Americans read the Bible based on their cultural and historical context in the USA. The incarcerated Japanese Americans’ interpreted the Bible as oppressed and victimized people hoping for liberation and for the “land of milk and honey” they were promised.[2] W.C. Smith’s theory of scripturalizing helps to decipher how a particular people group interprets a text to achieve some type of transcendence.[3] Japanese Americans’ interpreted justice in the Old Testament as a form of liberation from oppression and “[the Lord’s] fulfillment of the promise to give Israel ‘a land flowing with milk and honey.’”[4] This interpretation in part inspired a Japanese American optimism  about America as a place for living freely and flourishing after incarceration.

C.H. Kim is focusing James E. Massey’s community-situation approach specifically to Asian Americans. Massey says people relate to the Bible and interpret the Bible based on their situations and experiences.Christian Japanese Americans read the Bible as “a record from the people who struggled for their national identity and survival… [and] had great joys as well as sufferings.”[5] Interned Japanese American Christians were able to interpret the Bible as a story of their own personal struggles; however, they knew those struggles would eventually lead to the future joy of being liberated from the camps. The joy from the Bible is what Japanese American Christians focused on and allowed them to have a special understanding of their place under their God in the United States.

“Sometimes America failed and suffered…Sometimes she made mistakes, great mistakes…Her history is full of errors, but with each mistake she has learned….Can we the graduating class of Amache Senior High School believe that America still means freedom, equality, security, and justice? Do I believe this? Do my classmates believe this? Yes, with all our hearts, because in the faith, in that hope, is my future, and the world’s future.”

The incarceration of Japanese American Christians molded how they interpreted the Bible. The American government forced Protestantism on Japanese Americans which led them to interpret the Bible as hopeful, victimized people as seen in the valedictorian speech above. The graduating class of 1943 Amache Japanese internment camp knew life in America would get better for them and it did.  This Christian Japanese American interpretation of the Bible helped them be hopeful in times of struggle and ultimately perceive their futures living in a “land flowing with milk and honey,” not unlike their Japanese American forefathers did

[2] Chan-Hie Kim, “Reading the Bible as Asian Americans,” in The New Interpreter’s Bible: A Commentary in the Twelve Volumes, ed. Leander E. Keck, 164.