Fear not, no spoilers….but seriously, you need to go see the movie already! 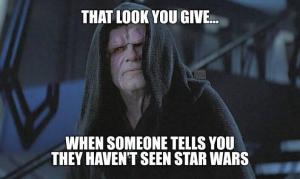 So I’ve been (over)thinking Star Wars for the better part of a month now. If you know me, you know I’m quite the nerd. For the past few weeks, though, it’s been turned all the way up to 11. Not only have I been obsessing over Star Wars, I’ve been thinking about Star Wars as American religion.
Why? Well, I’ve known for some time that I’m due for an end-of-the-year RiAH post. In the throes of syllabusing (like Charles McCrary and so many of us this time of year), my initial instinct was to blog on course construction. Then Richard Newton, Assistant Professor of Religious Studies at Elizabethtown College and fellow Star Wars overthinker, solicited essays on religion, religious studies, and Star Wars for Sowing the Seed (a student-scholar digital collaborative that hosts conversations on religion, culture, and teaching). Gauntlet thrown, challenge accepted, I settled on the following topic: What would it mean to think about Star Wars as American religion?

What does that even mean, you might ask? Well, to restate the question, I’ve been wondering under what circumstances (by what parameters, for what purposes) Star Wars might be considered American religion. To put it yet another way, could I include Star Wars in my Religion in America (RELS 250) course this spring? These are the kinds of questions that awaken – I know, I know, that pun was a little Forced – when you rewatch the (original) Star Wars trilogy and see The Force Awakens(twice), all while writing your Religion in America syllabus……. See what I mean? The nerd is notched up to Ludicrous Speed.

My nerdiness notwithstanding, it strikes me that how one answers these questions could tell us quite a bit. Whether a teacher is willing to consider Star Wars as American religion has the potential to tell us how they define “religion” and how they conceptualize the purpose of a “religion in America” course. Let’s begin with the negative. If we start with more standard definitions of religion, it would be easy to dismiss arguments for considering Star Wars American religion (let alone teaching it). Most of the common-sense definitions our students carry with them into our classrooms – religion is belief in god/s, religion is ethical norms, religion is something supernatural – do not describe a multi-billion-dollar blockbuster franchise. Forgetting Jediism for the moment, neither the films nor their fandom would warrant tax-exemption from the Internal Revenue Service, which characterizes “churches” as entities with a recognized creed, ecclesiastical government, distinct religious history, ordained ministers, and regular religious services (among other qualities).
One might further deny Star Wars standing as American religion insofar as it does not serve the pedagogical purposes of the course. If the teacher conceives the course as, first and foremost, an introduction to the religions found in America then, again, Star Wars probably wouldn’t make the cut. Jon Butler, Grant Wacker, and Randall Balmer’s Religion in American Life: A Short History (Second Edition, 2011) serves as a textbook example for such a disqualification. The opening scroll of their preface declares:

Religion–beliefs in supernatural powers, forces, and beings–powerfully shaped the peoples and society that would become the United States (xi).

Even if it’s got the Force, Star Wars is not belief in supernatural powers that interacts “with America’s peoples, society, politics, and life” (xi). It is an immensely popular series of fictional films.

But now on to the affirmative. If one’s working definition of “religion” is more capacious than “beliefs in supernatural powers,” if the purpose of the course is to view American history and culture through the lens of “religion” – as a category of analysis, rather than a found thing – then new possibilities emerge. Say we take Emile Durkheim’s classic definition from The Elementary Forms of Religious Life(1912):

Durkheim’s definition does not require Star Wars to be oriented around gods, or to involve belief in the supernatural, or to have an ecclesiastical government to be a religion. Instead, Star Wars is religion if it serves certain functions. If we can say Star Wars creates a community united by beliefs and practices relative to some thing sacred or special, then we can say Star Wars is religion. What makes some things special? Well, for Durkheim, nothing more or less than the proscriptions and prescriptions people place around particular things. (I bet you can guess where I’m going with this.)

For some people Star Wars: Episode VII – The Force Awakens is just a film – a fun one, perhaps, but a film all the same. But (many) others set it apart as something special. How do they do this? I’ll speak for myself here, though I know I’m not alone. (I’d venture a guess that I’m not even alone here on this blog). When I prayed that this new film would atone for the blasphemy that was the prequels, when I obsessed over arcana for months in anticipation of its release, when I preordered tickets to assure I’d see it as soon as I possibly could, when I reinforced taboos against “spoiling”plot points for other would-be viewers, when I wore my Star Wars t-shirt and took my seat alongside little girls garbed in Jedi robes and clapped and gasped and laughed and cried with the crowd – when I did all these things (and when hundreds of people in my cinema and thousands of people across the world did them along with me) I effectively engaged in an act of social sanctification. Together, we took something ordinary (a Disney sci-fi/fantasy film released in 2015) and made it extra-ordinary. This is just one way we could consider Star Wars American religion – I didn’t even begin to touch on Star Wars as myth-making. (There are so many of these, but my absolute favorite is S. Brent Plate’s frequencies essay.)

So it seems to me that the provocation “Should Star Wars be considered American religion?” could serve as a pedagogical litmus test of sorts. If you answer No, it might be because you’re concerned with cataloguing the beliefs Americans hold with regard to the supernatural, or charting the history of ecclesiastical institutions in the United States. If you answer Yes, it may be because you’re interested in identifying the rituals Americans engage in that set certain things apart as special, or in examining the effervescent experiences that unite Americans together in various communities.

Then again, your answer could simply indicate whether or not you have room for (one more) movie in your 16-week crash course in centuries-worth of material.

Matthew J. Cressler, PhD is Assistant Professor of Religious Studies at the College of Charleston where he teaches African American religion, religion in America, and theory in the study of religion (among other things). He is currently at work on a book manuscript titled From Conversion to Revolution: The Rise of Black Catholic Chicago. Follow him on Twitter @mjcressler.