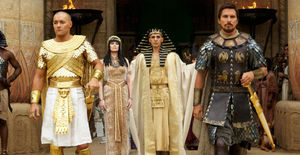 One of my New Testament students referred to 2014 as “The Year of the Bible” in terms of film. At the tail end of the year, Sir Ridley Scott gave his take on the Exodus story with the film Exodus: God and King.

I’m convinced that there’s no way to make a Bible film without wading into at least a shallow pool of controversy, but Exodus really dived in. Some took issue with the film’s “whitewashed” cast. Others took umbrage at the idea of an unhinged Moses.

For my part, a postmodern Exodus film has a real opportunity to help us think about race, religion, and violence. But on this score, the film doesn’t quite deliver. You can read more in my piece for LancasterOnline.