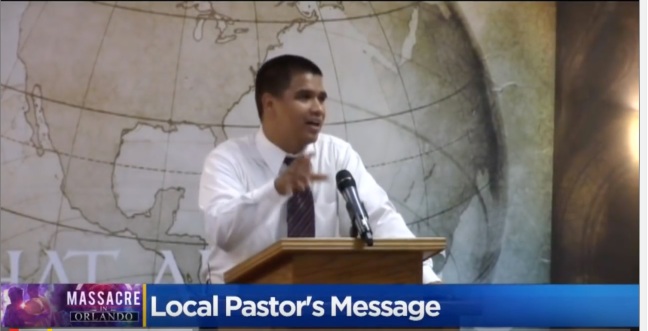 In this response to Twila McAdams and Amanda Robbins, Dr. Lloyd Barba uses the 11/9/16 presidential election to examine the tensions between the socio-economic and racial history of Latina/o Pentecostalism and the admonitions of Latina/o liberative hermeneutics. This is the fourth issue in our third volume. You can see the first and second volumes here.

Discussing Latina/o religion in contemporary political contexts is among my favorite pastimes; among my favorite past times to discuss is Latina/o religious history. I thank Professor Newton for this opportunity to engage in what already is a fruitful conversation. Now, having read the discussion posts by Twila McAdams and Amanda Robbins, I couldn’t be more thankful and excited to discuss Latina/o religious groups in a moment of transformative possibility. Both authors have sought to use Latina/o hermeneutics to understand historically discriminated groups and offered reflections that sow a seed by orienting readers and positioning religious groups towards a more inclusive society within local contexts –New York City. I will comment on their transformative possibilities and propose points of tension and contention in recent headlines pertaining to Latina/o religious practice.

McAdams positioned various Hispanic hermeneutics in productive conversation with the tragedy in Orlando this past June. No words or theology (as theodicy) can adequately explain or express the sorrow that followed the terrorizing of a historically discriminated group in the U.S. The fact that the victims were in an LGBQT nightclub prompted various organizations that traditionally have taken stances against LGBQT rights to publically condemn the shootings. Denominational and individual responses ranged from outright condemnation (with a strong affirmation of LGBQT rights) to statements in which the terrorizing was condemned but only after cautious throat-clearing prefatory caveats about LGBQT rights. (Most regrettably, pastor of Verity Baptist Church, Roger Jimenez, used the tragedy as a platform to launch into a malicious tirade against those who perished and the larger LGBQT community.

One would expect these comments from more infamous groups such as the Westboro Baptist Church, but something –a thing hard to explain and unknown to my study of Latina/o Protestants– seemed so unusual about this Latino preacher.). McAdams’ response demonstrates positive and responsible responses exhibited by members of Latina/o religious communities.

What is it that directs Latina/o religious folks to depart from hermeneutics with which we’ve become familiar in Segovia’s reading? Are Hispanic hermeneutics not one size fits todos? Those furthest removed from a context of liberation and struggle are most quickly tossed to and fro in a conservative U.S. religious-political context and carried about by every wind of nativist doctrine (and rhetoric) that do not have in mind the best interest of struggling minority groups. The emphasis in uplifting those of lower socio-economic status is noticeable in early Hispanic theology. We know from Segovia’s article that Liberation theology shaped major Latina/o thinkers. I have found that second and third generations Latinas/os, sometimes removed from a context of liberation or struggle, often find themselves in a battleground position in which they can accept or reject embedded cultural theology and metaphors. Upward economic mobility combined with looser ties to a diasporic homeland weaken ties to contexts of struggle.

Robbins highlighted economic and social justice and oriented readers toward a thriving and growing religious movement among Hispanics that was even captured in the early April edition of TIME magazine, brining the Latino Reformation into the national spotlight. Robbins immediately noted the intergenerational texture of Pentecostalism: it’s not merely a religion of immigrants but also of their posterity. Like McAdams did, Robbins steered the current conversation towards a generative discourse, specifically one that allows Hispanic Pentecostals to be a prophetic voice for myriad social justice issues. Robbins stated, “[t]his way of interpreting the Bible, gives Hispanic Americans the tools to transcend their oppression and discrimination and give it meaning through God that empowers them to build a world that strives for justice and equality.” Though largely politically conservative today, Pentecostalism emerged in various contexts across the U.S., some of which allowed for a prophetic voice to cry out. The first generation of Pentecostalism included staunch anti-capitalists (Frank Bartleman), those who strove for racial cooperation (early Azusa Street Revival participants), and an entire generation of pacifists who were jailed for their beliefs. Class arguments did not escape these critiques and evaluations of the movement. “If it had started in a fine church,” testified one prominent Methodist laymen, “poor colored people and Spanish people would not have got it, but praise God it started here” (Azusa Faith papers, November 1906). According to the anonymous Methodist laymen, God seemed to employ a preferential option for the poor in that struggle. This redacted history of Pentecostalism which largely elides the history of critical characters is what the late Walter Hollenweger described as a “mutilated history.”

The engagement of McAdams and Robbins are admirable and they have demonstrated possibilities of Hispanic contextual theologies. The ways in which they have demonstrated the ways of productively using Hispanic theological paradigms will increasingly prove significant as many Latinas/os brace for the presidency of Donald Trump and the implementation of new laws crafted by his appointees. Had McAdams and Robbins shared their finding with us post-11/9, there is little doubt that they would have discussed the current state of uncertainty. Hoping for the best but bracing for the worst, many Latina/o religious communities have begun to prepare for Trump’s promised mass deportations. Closer to home for many of us in higher in higher education, he intimated that he would rescind President Obama’s executive order regarding Deferred Action Childhood Arrivals (DACA).

I found it curious that McAdams quoted Samuel Rodriguez, president of the National Hispanic Christian Leadership Conference. Almost wholesale aligning with the politics of his white Evangelicals counterparts (mostly around the issues of abortion) and consequently against the interest of DACA Dreamers, Rodriguez and NHCLC Vice President Tony Suarez personally endorsed Donald Trump. The platform of the NHCLC had given many Hispanic Evangelical students hope that leaders of the organization would support political leaders who have the best interest of the Hispanics in mind and eschew those who either overtly (by prejudice) or covertly (by policy) plan to discriminate against Latinas/os.

I struggle to see how these leaders have employed Hispanic theological paradigms described by Segovia or any contextual hermeneutic. Discourses on social media evidence that many Hispanic Christians naively engaged in politics of identity nomenclature (e.g., first I am Christian, then I am Hispanic) that conceals much more than it reveals (as if either is not contextually situated and attempts to homogenize and claim the label Christian for one particular political leanings).

Hispanic Christians who move in a spirit and hermeneutic discussed by McAdams and Robbins aren’t without a critical mass or other leaders paving the way for more progressive turn. Some might recall that Gabriel Salguero, president of the National Latino Evangelical Coalition, spoke at the Democratic National Convention in July of 2016 and supplicated, “help us to move forward in unity a more perfect union that believes that despair and violence can never conquer love, hope and justice. McAdams and Robbins offered discussion points that resonate well with Salguero’s final request, “give us optimistic tenacity to respond to some of today’s persistent chasms, con esperanza.”

Lloyd Barba, PhD is the C3 Mellon Postdoctoral Fellow in Latina/o Studies and Religion at Williams College. His current research focuses on the intertwined history of race and Pentecostalism. See his essay “Jesus Would Be Jim Crowed: Bishop Robert Lawson on Race and Religion in the Harlem Renaissance” in the Journal of Race Ethnicity and Religion.