Maya Aphornsuvan (Elizabethtown College ’18) follows the story of rapper, MC Jin, examining how the Bible and race color the meaning of his success–whether he wants it to or not. This is the second issue in our fourth volume on the Bible and Race in the USA. You can read a response to this post here.

“If anyone is in Christ, he is a new creation. The old has passed away; behold, the new has come.”

This Bible passage was brought into an interview by the South China Morning Post with MC Jin, a Chinese-American rapper who has slowly been getting back into the spotlight since he left the USA.[1] MC Jin, also known by his birth name, Jin Au-Yeung, was born to Chinese immigrant parents in Miami, Florida. He stood out at local rap competitions, and at what could be considered his break through moment, he fought off his opponent’s racist insults in a rap battle and left his opponent stunned. Yet his moment to fame faded quickly, and he found himself in Hong Kong a few years later, where, to his surprise, he received recognition. He then came back to America with a family and as a born-again Christian. MC Jin started bringing more spirituality into his music, whereas his previous records would have harsh language and gang related comments.[2]  Looking at MC Jin’s life shows us how some, certainly not all, members of the Asian American community learn to navigate life as a minority in a nation dominated by a different ethnic majority by stepping closer to the rule makers and using their rules to benefit himself. MC Jin’s changes through life didn’t only change as in his physical locations, but these changes impacted the labels he created for himself and labels created by others.

MC Jin built his career as a minority in a modern American society in which the orthodox, those not in the minority, set the rules for the functionality of society. Bourdieu explains that society is a creation of a web of meanings that are exchanged between people. But what’s interesting in this exchange is that there are two groups of people within one context exchanging things with each other: the orthodox and the heterodox.[3] When looking at America, the orthodox can also be known as European Americans who settled down and created an American society by creating laws and institutions. So Asian Americans, by definition, became the heterodox as they are the group who came after the rules had been set, with the majority of Asian American immigrants coming to the states beginning in 1965.[4] This group’s arrival into an established American life forced them to follow the orthodoxy’s lead. Therefore, MC Jin, presumably, had to navigate a world in which his ethnicity forced him to live, think, and work in ways that went along with a society that European Americans had already created.

But, unsurprisingly, living in the same society forces these different groups of people to interact and exchange ideas and identities. Wilfred Cantrell Smith writes that within a society, people will look to scriptures, which includes texts, ideas or words, to solve their problems.[5] This is a process he calls “scriptualizing.” These texts will dictate what is right and what is wrong in a given context according to the point of view of the reader. But in the American context, European Americans, the orthodox, have also used scriptualizing to dictate how other groups, such as the Asian American community, can grow independently without referring to the European Americans’ version of scriptualizing. With this in mind, MC Jin’s growth in the rap industry was never truly his own experience, as he curated his raps in the same way other rappers would, even though expression through music is an individual process. MC Jin’s emergence as a rapper also challenged the orthodoxy as he wasn’t living up to labels such as the Model Minority Myth, which is an example of ideas or stereotypes placed upon heterodox ethnic groups that is mostly associated with Asian Americans, created by the orthodox.

How Americans have come to associate Asian Americans with the Model Minority Myth systematically is an alternative way of looking at how MC Jin’s labels were created for him. As Taves explained, humans create identities for everything.[6] These identities are complex because we aren’t simply giving names to things, we also give meaning to more complex ideas, such as ethnicity. Asian Americans, for example, are seen as an ethnic group on the surface. Yet when we look from the lens of how complex ascriptions are given to Asian Americans, we realize that what makes a person seem to be a member of the Asian American community isn’t simply their appearance, it’s what they eat, the languages they use, their religion, their grades, how successful they are. Once the orthodox decided to ascribe success through the Model Minority Myth to the Asian American community, it became that community’s, and MC Jin’s job to navigate through those complex identities in society.

The Model Minority Myth, in turn, became an ascription that is perhaps the most well-known “quality” of Asian Americans. This myth gives the impression that Asian Americans have the tendency to be more successful than other minority groups, including financially, educationally, career wise, and so on. While it seems harmless, it doesn’t allow for members of the community to be viewed as individuals; rather they are viewed as successful before they even get to live their own life. It forces people to live up to these expectations, and when they aren’t as much of a model as society thought, they are disregarded. And when looking at MC Jin, a man who didn’t go to college but went on to become a rapper who left the country after not gaining success, it is understandable why the pressure to be perfect by others would have impacted him so much. He needed to look for another scripture to heal his pain and guide him through his problems.

In a way, MC Jin’s process of going through his music career brings him closer to being a part of the orthodox. His decision to quote 2 Corinthians 5:17 is significant, because it showcases MC Jin reading a scripture, in this case a Bible passage, to help him overcome his past and his problems and reach a moment of transcendence in which he is accepted as a born-again Christian American, and not just as Asian American rapper. He explains that he used to be expected to represent the Asian American community in the rap world, which is an unjust and unrealistic request, as the Asian American community is often grouped into one ethnic group, when in fact, it is comprised of Cambodian Americans, Vietnamese Americans, Korean Americans, Chinese Americans, and many more cultures and countries of origin. Now, it is possible for him to be in the category of Christian American musicians, and he does not need to be viewed as a Model Minority as he has the Bible on his side now. The new creation of MC Jin came after he realized his commitment to Christ. Although his old identity passed away, its spirit can still be seen, and MC Jin’s new identity has to fight to overcome perceptions that are still associated with the old MC Jin.

MC Jin’s past scriptualizing process as a heterodox in America was different than his current process. He started off using rap as his scripture, as his way to overcome to his problems of being insulted and called out for his ethnicity and turned it around to work in his favor, which became his moment of transcendence. Yet he was still operating in a context where he was not close to being the orthodox group, and upon his return from Hong Kong, his decision to add on the Christian label to him changed his scriptualizing process, and moved him from being a member of the heterodox to one step closer to the orthodox.

[5] Wilfed Cantwell Smith, “Introduction: Presenting the Issues,” 4-9 in What is Scripture?: A Comparative Approach (Fortress Press, 1993). 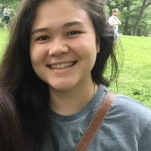 Maya Aphornsuvan ‘18 is a junior at Elizabethtown College. She is a Political Science–Religious Studies double major with interests in media studies, social justice, and comparative religions. She serves as the production assistant of the podcast, Broadcast Seeding.