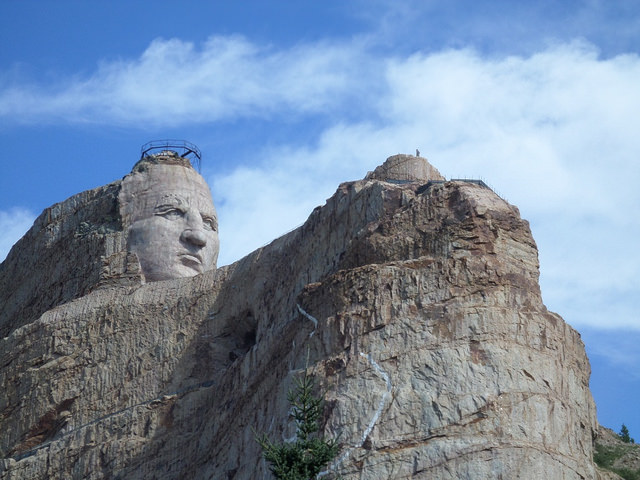 Madi Dodge examines the motivations involved in remembering indigenous pasts. Israel Dominguez offers a response. This is the third post in our series on indigeneity and part of a conversation on “The Bible and Race in the USA.“

Carved into the rock of the Black Hills of South Dakota, is one of the most popular and historical landmarks in America; Mt. Rushmore. As most Americans know, it depicts the faces of four presidents that made a great impact on our country. However, what some may not know is that in those same hills is another sculpture, over 65 years in the making–a sculpture to honor the great Native American hero, Chief Crazy Horse. While this monument pays homage to a great Native American hero, placing it among the white American heroes, it seems that there is a disconnect between the ideals and religious beliefs of the Native Americans and those of the people carving the statue. What are these beliefs, and how could this beautiful tribute to the great Native American hero be so controversial? This question can be answered by taking a look at the deep connection that these people have with nature, and their homeland. However, we should start by taking a look at the Bible.

In the story of the Exodus, the Holy text depicts the Israelites, who walked for many years to get to the “promised land.” Much like the early settlers of America, they arrived in this new land to find that it was already inhabited by a different people. The Bible calls these native people the Canaanites. This Exodus story resonated with the Native American people who faced the adversity of foreigners coming to their home and claiming it as their own; slaughtering everyone in their path. In the Battle of Jericho, the Israelites brought the walls of the Canaanite fort crumbling to the ground, then stormed the keep in order to claim the riches, kill the locals, and burn the city down, saving only the few that had helped them do so. This should, perhaps, sound quite familiar.

This is the experience of the Native Americans who lived and died through the imperialism of the early American settlers. For these reasons, the Native American people do not identify with much of the text written in the Bible. Robert Warrior, in his dissertation about the connection between the Canaanites and the Native Americans, says “Joshua defeated the whole land, the hill country. . .and the lowland and the slopes, and all their kings, he left none remaining, but utterly destroyed all that breathed, as the Lord God of Israel commanded.” He states that Canaanites “have status only as the people {to be removed] from the land in order to bring the chosen people in. . . .They are wicked and their religion is to be avoided at all costs.” Much like the Canaanites, the Native Americans withstood the oppression and were viewed as a wicked nuisance to the entitled newcomer. [1]

Not much is said about the religious beliefs of the Canaanites described in the text, but the religious beliefs of the Native Americans are far from wicked, and perhaps not something to be avoided at all. George Tinker, in his essay, describes the Native American religion or spirituality as being far more personal and profound than the hateful imperialistic views which led the early settlers to act as they did. Tinker describes a few main aspects about this phenomenon. [2]

First of all, the prayer practices of the Native Americans greatly differ from traditional Christian prayer. While most Christian prayer involves speaking words aloud and ending with “amen,” the Native Americans simply pray in silence, saying only the phrase “Mitakuye oyasin,” which means “to all my relations,” or “we are all related.” This type of prayer is demonstrated in the following video.

Another aspect of this spirituality is the idea of the circle. In prayer, all ages and genders gather in a circle, representing the one-ness of all people, as well as all that lives and breathes. In addition, Tinker describes the Native Americans and their focus on spatiality, rather than time. As is common knowledge of the ideals and practices of these people, as was demonstrated by the prayer, the Native Americans focus greatly on the world around them, and do their best to respect and appreciate the earth and its gifts. They treat their space with kindness and respect, and try to do no harm.

It is with these beliefs and ideals in mind that I go back to the Black Hills of South Dakota and the monument of Crazy Horse, and respectfully question the choices of those who are creating it.

The idea of building a monument this large (641 ft by 563 ft) to honor one person, a supposed hero to the Native American people, does not match the idea of the circle prayer that makes all people and living things equal. To honor just one person is to set them above all others. In addition, this monument will be used to demonstrate and share the history of the Native American people but will exploit the sacred land that they hold dear; the land where many of their dead are buried. Destroying the natural stone of the black hills does not honor the respect for the earth or the spiritual spatiality of these people. It seems that this is, in fact, purely for the sake of honoring time. According to Tinker, that is not at all what the Native Americans believe to be sacred.

According to John Fire Lame Deer, a Lakota Sioux Medicine Man, “The whole idea of making a beautiful wild mountain into a statue of him is a pollution of the landscape. It is against the spirit of Crazy Horse. Native American activist Russell Means, in an interview, said,“Imagine going to the holy land in Israel, whether you’re a Christian or a Jew or a Muslim, and start carving up the Mountain of Zion. It’s an insult to our entire being.”

For many reasons, the monument fails to achieve the level of honor and pride that the sculptor originally intended. Whether it be the lack of compliance with the spiritual beliefs of the Native Americans, or simply the exploitation of the sacred land, this is the discourse that should have happened, perhaps, before the blasts that started this long-winded project in 1948.

Your paper offers a lot of food for thought. It is interesting to see the discourse around the Crazy Horse Monument, especially given the trouble around its conception and potential completion. The most critical feedback I have for this paper regards blanket statements. For example, towards the end of your piece you write: “In addition, this monument will be used to demonstrate and share the history of the Native American people but will exploit the sacred land that they hold dear; the land where many of their dead are buried. Destroying the natural stone of the black hills does not honor the respect for the earth or the spiritual spatiality of these people.” It is highly problematic to assume that the beliefs of some in a community represent the beliefs of all in the community.

Furthermore, it is imperative to avoid sweeping generalizations that lump together multiple cultures and communities into a false homogeneity. For instance, when comparing types of prayer, you qualify that “most Christian prayer involves speaking words aloud and ending with ‘amen,’” but then go on to say “the Native Americans simply pray in silence, saying only the phrase ‘Mitakuye oyasin,’ which means ‘to all my relations,’ or ‘we are all related.’ Which Native Americans? In which language? Morever, claims such as “but the religious beliefs of the Native Americans are far from wicked,” are essentialist and disregard moral relativism.

This topic is one that can engender a lot of fruitful discourse. It could especially benefit from exploring what the other side of the controversy has to say and putting both perspectives into conversation with each other.

Israel Dominguez is a second-year M.A. student in the Department of Religious Studies and Chancellor Fellow at the University of Colorado, Boulder. His primary research interest focuses on decolonization within the context of U.S.-Mexico borderland religious traditions.